Round 2 Motorkhana sponsored by Coffs Harbour Auto Electrical was a huge success!

There were new faces and the Juniors times were incredible.  There were many different courses through out the day, a small breakdown of runs, times and winners of the day below;

Run 4 – Nicholas Owen smashed out a 42.08 in his 4wd Liberty, while hitting the rev limiter!! This guy knows how to have fun!

The Juniors competed well. Tamara Beard came first with her fastest time 43.38 seconds in Run 2. Daniel Hassen a first time junior competitor had a blast in the Coffs Harbour and District Sporting Car Club club car available to anyone that wants to have a run in these events.

We also had our very own Greg Johanson and Danni Johanson compete. This event was Danni’s very first Motorsport event and she had a great time going sideways.

Our race ready RX Subaru we have restored over the last 6 weeks was also on display at the event.

At the end of the series the Most Improved Motorkhana competitor will WIN a $200 voucher to go towards Labour, Sparco, Monit, DMS Suspension, or Wedsport Wheel nuts products.

Round 2 Motorkhana sponsored by Coffs Harbour Auto Electrical will be on Sunday 26th July at Raleigh International Raceway. 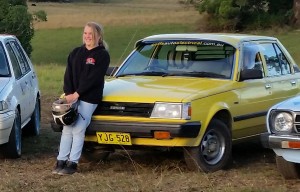